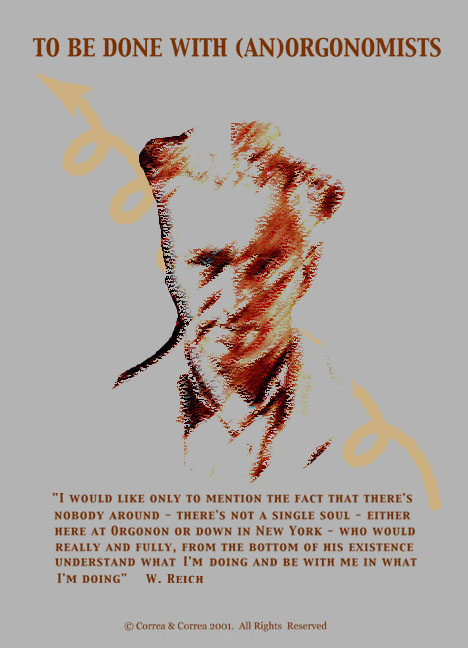 Between 1996 and 2001, we had several rounds of email correspondence with Dr. James DeMeo, the founder of the Orgone Biophysical Research Laboratory, Inc.

Aware of Dr. DeMeo's long-standing historical interest in the orgone motor (discovered and developed by Dr. Wilhelm Reich), in the summer of 2001 we invited Dr. DeMeo to visit our laboratory and - under strict conditions of confidential non-disclosure - provided him with a series of demonstrations of our patented PAGD technology and improvements to it , as well as of a number of the new aether technologies developed by us. Included in these was the first precise, functioning demonstration since Reich's death of an embodiment of the Orgone Motor - precisely as Reich described it - as well as our novel improvement, referred to as the Aether Motor, developed at one of our laboratories.

In July, before the aetherometry.com web pages were launched, we further provided Dr. DeMeo with advance confidential access to the materials intended for publication on the website.

Although, as our archives make clear, our comprehensive assessment of the scientific and intellectual poverty rampant in the field of (An)orgonomy did not invite further contact with those who go by the name 'Reichians' or 'orgonomists', it struck us as an interesting experiment, and one well worth conducting, to attempt to involve at least one of the known ostensive followers of the late Dr. Wilhelm Reich, one with a reputation for more open thought - to see if it were possible to elicit a modicum of curiosity regarding the extraordinary advances in physical theory which could be brought about if Dr. Reich's work in basic Physics were to be taken up seriously and pursued by biophysicists. While initially we hoped we would find a reason to modulate our conviction that the Reichians of today are not only devoid of curiosity but, somehow, viscerally repelled by anything even vaguely resembling scientific methodology - we were, as it turned out - and sadly so - obliged to revalidate our initial evaluation.

The result of this relationship, which developed through email correspondence, culminated in Dr. DeMeo presenting us with one of the most astonishing documents we have ever received - purportedly addressing our work. Admittedly having a poor grasp of physics, biology and mathematics, Dr. DeMeo nonetheless took it upon himself to produce a chaotic 12-page so-called 'constructive critique' of monographs AS2-01 through AS2-09 of Experimental Aetherometry; a document which - while offering nothing in the way of either construction or critique - is, to our minds, a most instructive study of how any will to undertake understanding on the part of 'believers' is scrupulously exorcised in favor of the perpetuation of a superstitious, mystical belief system. It becomes quite evident, as one reads through this material, that Dr. DeMeo not only failed entirely to follow the physics and mathematics of the aetherometric arguments and proofs (a failure already evident in preceding email exchanges), but set about to distort both their content and, as well, the content of the physics tentatively set out by Wilhem Reich in his later years. The clear intent of his 'critique' was to obfuscate both bodies of work in favour of a perpetuation of the established, comfortable churches of 'orgonomy' that have done so much to poison the waters for serious inquiry in this critical field of investigation. Since we declined - despite Dr. DeMeo's demands - to provide in our monographs bogus acknowledgements to Reichians for work which was never carried out by them, we became branded, ipso facto, as enemies of Reichianism. When asked on several occasions to provide us with references to the writings of those he was insisting on being cited, Dr. DeMeo was, of course, unable to supply them - and resorted instead to such absurd speculations as: Reich himself had undoubtedly carried out the Correas' novel experiments - but had just never bothered to report them!! Since we declined to give credit where it was not, in our view, due, he decided that our work was to be torpedoed by the Reichian 'community' at large. And this, he apprised us, he intended to bring about. While we do not consider the hopelessly confused writings of Dr. DeMeo in any way a threat to the integrity of our writings, we present the archive of the events as a study of what Reich would have designated the 'emotional plague' at work - it is in the actions of 'decent' people that one finds the fearful closure of the religious mind.

To us, these events throw an extraordinarily curious light on the frenetic missives which emanate from Dr. DeMeo's organization, denouncing committed fanatics who know only how to destroy what they envy and perceive as a threat to their specific sect.

It was not our intention to make any of this material public. However, following the receipt of communications from Dr. DeMeo that he did already, and intended to continue to, misrepresent the content of our ABRI publications, and which furthermore also indicated that he had conveyed confidential information regarding the demonstrations of our technology which we provided to him under non-disclosure conditions, to persons to this day unidentified to us (though it is not too difficult to surmise their identities), raising the prospect of further misrepresentation of our work, we have decided to publish here both the pertinent email archives concerned with these events and our extensive response to DeMeo's insidious so-called 'critique'.

"To Be Done with (An)orgonomists":