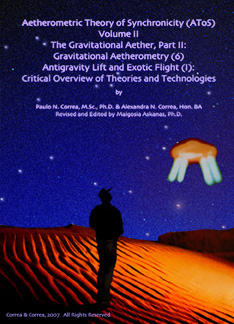 This communication is the second of a group of four originally intended for publication in Infinite Energy at the invitation of Dr. Eugene Mallove, and dedicated to the scientific, technological and political problems presented by exotic flight and lift systems - in particular those relating to possible control of gravity. It examines the main post-WWII efforts to devise new flight and space-travel technologies, focusing on the early speculations about possible electric and magnetic control of gravity, and on the development of electric propulsion (EP) systems. 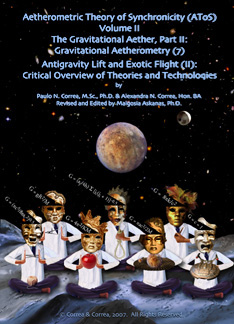 In this communication, the authors examine the main lines of research into the nature of gravity over the past 6 decades, with a focus on Einstein's General Relativity and General Theory of Gravitation, quantum-mechanical models of the graviton, Geometrodynamics and the ZPE theories, and Van Flandern's model of gravity - all of which are contrasted to Aspden's theory of a dynamic Aether. 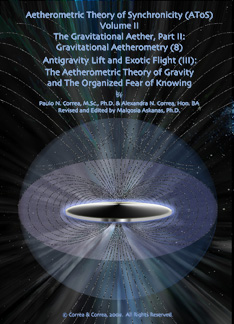 This communication presents a synopsis of the aetherometric theory of gravity and antigravity, explores the fundamental aetherometric notions of massfree energy, Aether and Matter, and systematically examines the physical functions that enter into play in the determination of a relatively universal and ubiquitous G force function that serves as attribute of the Aether lattice 'of space'. The reader is introduced to basic concepts such as - the energy structure of the Aether lattice; the aetherometric concept of inertia and the energy principle of inertial acceleration; the difference between the primary gravitational energy and the graviton energy of a lepton; the distinction between primary gravity, ordinary gravity and gravitation; and the basic aetherometric function for the release of graviton energy in pair destruction drives. 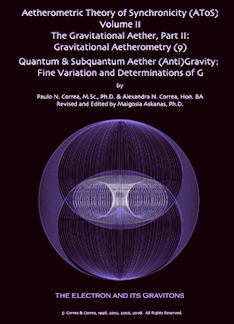 The present communication has an ambitious reach. It describes in detail the fine subquantum structure of the Aether lattice, and identifies its properties: the modal (or tendentially invariant) Planck's length, which is an actual wavelength (λPlanck) of subquantum ambipolar charges whose flux creates the lattice; the fundamental gyro-gravitational moment

'of space' (ie of the lattice) and its relation to Planck's constant of moment in the world of the quantum; the frequency of the vacuum corresponding to the modal energy of the Aether lattice; and the ultra-high energy emissions from the lattice, which have been mistakenly assumed to be mass-bearing neutrinos or X-particles, and are shown to be massfree ambipolar charges in the range of 1015 to 1024 eV.

Thus, we are led to present a specifically aetherometric "cosmogenic production scenario".  We suggest that these ultra-high energy, massfree ambipolar charges are the real cosmic primaries responsible for the ultra-high energy spectrum of cosmic rays (CR).  We also indicate exactly how these tremendously energetic particles are released from the Aether lattice in the process of production of Matter and "cosmogenic radiation" (CBOR, mCBR and rCBR), by secondary superimposition of (2°) lattice elements derived from the energy of the (1°) ambipolar lattice constituents.  Accordingly, our aetherometric model also explains how emission of gravitons from the Aether lattice accompanies the condensation of mass-energy and the emission of ultra-high energy ambipolar charges (CR primaries).  Aside from the "production scenario", the outcome of this approach is a theory of the dual structure of gravitons (in phase-energy constructs and in "free transit"), the identification of their precise fine structure and geometry, and a model for the local, punctual variation of G.

We examine the fine structure of the Aether lattice of space in all its phase energy configurations that produce either the 'universal invariant' G force or a bipolar variation that locally increases or decreases G.  In particular, we focus on how leptonic and baryonic particle creation necessarily engages a local G increase, as opposed to the local G decrease expected when the lattice releases antigravitons instead.  A total of 8 processes are isolated, and 14 distinct aetherometric functions (including those relating to the conversion of the Newton into the meter-second system units of force) are employed in the determination of the correct value of the 'invariant' G, whose simplest expressions is:

also termed the aetherometric lawful value. This value of G is found to be remarkably close to the mean±SEM of 16 distinct numerical determinations:

In the course of the investigation, the exact value of the so-called 'Planck's length' is determined as an instance of a wavelength function shared by both gravitons (of either type, phase-graviton or transit graviton) and the ultra-high energy ambipolar charges that modally constitute the Aether lattice.  We propose an exact value for the invariant or modal Planck's length, and further propose that, whether the length (function) is variable or invariant, G is always the product of that length by m sec-2 (KkrSS = 1 m sec-2).  We also identify a gyro-gravitational moment

and formally show that most elegant of the Aether's subquantic 'utterances':

and 'Planck's length' are variables involved in the physical and analytical determinations of G, of its value and its variation.

These findings give rise to mutually consistent quantum and subquantum descriptions of the gravitational field and the ultimate energy structure of the Aether lattice.  A search for the consistency of physical descriptions of the quantum and subquantum worlds cannot be reduced to or identified with a search for a theory of everything (TOE), or a search for a unified theory.  Unification comes about after reduction, identification and generalization.  Whereas consistency poses a different problematics than that required by the need for unification(s).  Consistency poses the problem of the connectivity of the real, of the 'actual physical'.  It is a matter of functional relations, of how energy converts into energy, and not a matter of reductions, identifications and probability states.  Consistency requires a physics that thinks in terms of energy, not in terms of mass (mechanism), or in terms of space (relativity), or in terms of  topology (probabilism).  Only the concept of energy can consistently connect the senses of the physical world.  An adequate quantum description or account cannot be such unless it is already compatible with - and adequate to - an also adequate subquantum account.  What's adequate is a connection - the nexus - and not an operation of unification, reduction, identification.

1. A family of toroidal structures to which the phase-energy graviton belongs, and which can serve as energy storage (as in holding mass-energy together, or in free fall, etc).

2. A family of epicycloidal structures to which the primary gravitational energy swing and all 'transit' gravitons released from the lattice belong. 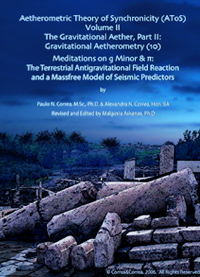 We present a new model of the deviation of terrestrial gravitational acceleration from the normative theoretical value. Independently of the crustal variations in mass density, the model identifies two distinct latitude-dependent antigravitational fluxes, a massbound flux subsumed under the notions of centrifugal reaction, force and acceleration, and a larger massfree flux that constitutes a field reaction. Neither flux is geometry dependent, and only the massfree flux can vary. Background levels of the field reaction exist in the absence of significant seismic activity. However, in this model, any increase of the field reaction flux above background levels leads to seismic activity. It is proposed that the process is mediated by an antivertical wave (AG-wave) whose energy and momentum is subsequently transduced into the ordinary P- and S-waves. Accordingly, a new earthquake magnitude scale is proposed, based on the properties of AG-waves. AG-wave accelerations, velocities, periods, and electromagnetic emission markers are identified and provided as indices of the magnitude of seismic disturbances. The AG-wave model also connects an entire set of pre-seismic events that might be used as earthquake predictors - namely, groundwater and crustal dilatancy, release of hot, ionized geochemical gases, in particular radon, and anomalous MHz to kHz electromagnetic emission - and explains periodicity and attenuation (in duration and intensity) of cyclic aftershocks.

The AG-model is part of a wider aetherometric approach to seismology and the physics of gravitational anomalies (eg Bouguer's, etc). In this context, the aetherometric model is extended to include an analysis of the hydrogen fusion pathways responsible for 'dark stars' and galactic so-called 'black holes', pathways which may also be at work in the asthenospheric and subasthenospheric cores of the Earth. In line with aetherometric theory of these fusion processes, they could be the source of both the AG-wave and the attendant keV ambipolar radiation responsible for a different set of pre-seismic events that might also be used as earthquake predictors. In this context, we connect pre-seismic high-energy ambipolar radiation released from the Earth's mantle or core to: (1) pre-seismic production of anomalous light and heat(s) by electron plasmas, (2) broadband attenuation of electromagnetic signals with increased noise (analogous to the attenuation induced daily by the solar ambipolar flux), and (3) pineal-mediated (in vertebrates) or magnetotactic (in invertebrates and also in birds) detection of pre-seismic ambipolar radiation during the initiation or nucleation phase of earthquakes.