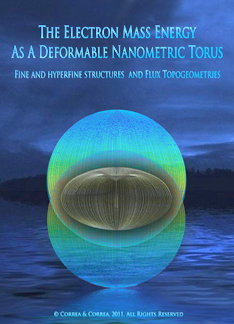 We examine the physical functions behind classical theory, Bohr’s neo-classical approach, and the most recent quark model of the electron, and propose an alternative model that finds the electron rest energy to have (1) fine and hyperfine structures that conserve mass, force, linear and angular momenta; (2) volumetric flux geometry and (3) a singular deformable topology that varies with states of motion. We determine the ring current (e τk-1) = 1.03074229*10-3 C sec-1, the wattage and rate of time-flow of the electron mass-energy flux and its natural synchronization with the Time-manifold of the Aether lattice. We differentiate the topogeometric models of the (globular) photon and the (toroidal) electron brought out by aetherometric analysis, and suggest distinct torus geometries for the electroinertial and photoinertial flux configurations. We find that so-called “states of spin” present a cylindrical hypercoiled conformation of the photoinertial configuration, and that inertial acceleration may involve coniform hypercoiled transitions of the spin-state electron mass-energy flux, that bridge between the distinct flux configurations. The anomalous magnetic moment (modified by the Landé factor g) is derived as a property of the hypercoiled conformations of the mass-energy flux in the photoinertial configuration. The ‘spin state’ value of electric charge as a linear momentum is found to be

We contrast, feature by feature, the aetherometric analysis of the electron mass-energy flux with the most recent model proposed by quark theory (QED/QCD). In fact, no real fine or hyperfine structures are brought out by the latter, and we formally show that the determination of the electron mass sought, but missed, by QED is simply 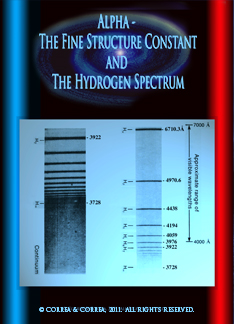 Previous redefinition of the electron mass-energy as a closed toroidal flux now permits reexamination of the Bohr model of the hydrogen atom and the identification of its fundamental errors, strictly on the basis of an analysis of the kinetic energy of the permissible excited states of the electron. Foremost amongst these errors was the incapacity to separate the magnetic frequency of the electron and associated kinetic energy, from the quantum frequency of the maximal kinetic energy of the satellized electron in the hydrogen atom - which we find to be equivalent to the Hartree energy. We identify two basic modes of kinetic energy storage - the band-flywheel and the precessionary flywheel - and provide the solution for magnetic Larmor precession of the electron torus in kinetic states. These findings lead to a re-appraisal of Eddington's fundamental physical ratios, and to the correct and consistent re-determinations of the fine structure constant, alpha, presented in the meter-second, SI and CGS systems. Three analytical tests are constructed that compare the distinct aetherometric determinations of alpha with the conventional determination, and demonstrate how only the former can be correct and consistent. These tests also predict the correct meter-second value of electric charge and the exact hydrogen spectrum - with virtually no deviation from the observed localization of the photon emission bands.

We identify the systematic errors in the determinations of the Bohr radius and the "classical electron radius", and trace the inconsistencies of classical theory in its treatment of orbital electrons. We demonstrate that the maximum kinetic energy of atomic hydrogen is the Hartree energy, and suggest that Hartree-size photons can only be emitted from hydrogen anion because of the special kinetic properties of the electron stack in the anion. Stack interactions are briefly discussed, and so is the failure of the Millsian hydrino model. We show, physically and chemically, how no surplus energy can be extracted from redox or acid-base reactions of hydrogen. We propose a Hartree-energy-based formal demonstration and quantitation of the electric linear momentum property of charge, and a corrected and complete system of Atomic Units. We provide error-free, consistent dimensional analyses and exact meter-second equivalents of essential physical units and their quantities - the coulomb, the ampere, the farad, the ohm, the henry, the joule and the watt. From first principles, we ascertain the correct magnitudes and functions of electric permittivity, magnetic permeability and the impedance of "the vacuum". Analytical corrections are also made to our previous experimental work. The impedance of "the vacuum" is treated as a massfree electric reaction to the displacement of charge and photons, around which is formed a cluster of subbarrier (so-called "phonon") channels apparently involved in "spontaneous fusion" events. A single 99.7 MeV ambipolar emission appears to be responsible for the ohmic "vacuum" reaction, with a Tesla electric frequency of 3.396*1024sec-1. 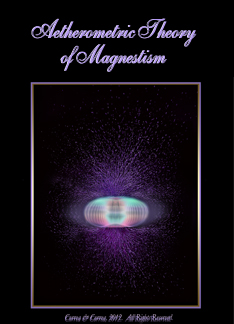 The aetherometric theory of magnetism proves that there is no independent physical reality to the notions of a "magnetic energy" or magnetic monopoles. There is only electric energy associated with massfree and massbound charges, and in the case of the latter, this encompasses kinetic energy and mass-energy. All forms of electric energy deploy constitutive magnetic waves and diamagnetic fields, but the energy associated with magnetism is electric, and not magnetic. Similarly, all the magnetic frequency functions that we have identified and analyzed are found to be subtypes of electric (nonquantum or Teslan) frequency functions. In this context, we systematize the fundamental rules and formalism of the aetherometric treatment of energy, power, and the quantum and non-quantum frequency functions of massbound and massfree charges. Even though we demonstrate under what conditions in vacuo H and B have the same value -

The analytical power of the aetherometric technique is underlined by a series of fundamental and practical determinations. Amongst the fundamental examples we highlight the linear density of "electromagnetic" wavelines with speed v = c in the electron mass-energy given by its "intrinsic magnetic field" function H

The gaussmeter does not exactly measure (real) gauss, or the reciprocal of radial length, but in fact it measures angular 'velocity' or frequency (read gauss), which we have noted is calibrated for the electron magnetic field wave. Indeed, the same numerical value of a cyclotron frequency can result in very different values of field B, depending upon whether the field B in question arises from a flux of massbound versus massfree charges. Lastly, we provide exact equivalences for the correct fundamental magnetic field units of the CGS and SI systems:

and determine the angular cyclotron frequency of a magnetic field of 1 gauss for massfree charge with speed Wv = c:

This monograph must be purchased before it can be viewed.  It is available exclusively to ISFA members, or by special arrangement. 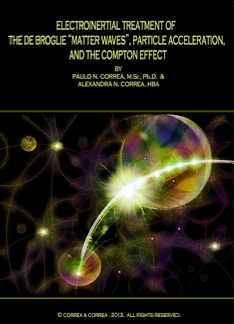 We propose an electroinertial analysis of particle acceleration, tested with electrons or beta particles, that makes superfluous the relativistic contention of mass increase with acceleration as explanation for the asymptotic behavior of linear speed in the range of subluminal values. Likewise, the hypothesis of a magnetic brake is also tested and found not to be satisfying. Instead, we propose an electric brake sourced in the limitation that the mass-energy of a charge-carrier imposes upon the kinetic energy of the charge, as the very condition for the conservation of its mass and inertia, and which operates at the level of the electric (voltage) wave of that kinetic energy. Charge and mass are both found to be conserved. With this new method, the Bertozzi experiment and variants, as well as the Kauffmann-Bucherer beta decay experiments, are re-analyzed. New algebra is provided that treats this electric brake without recourse to any relativistic transformations, while matching the empirical data more closely than Special Relativity. Essentially, above a minimum limit found to lie at 284 keV, the kinetic energy and voltage increasingly ("asymptotically") diverge from the applied field input energy and voltage, up to a limit de Broglie wavelength given by the Compton-electron wavelength. Similarly, the de Broglie total energy of the accelerated particle is found to have half this wavelength as its limit.

The implications of this analysis for the "elastic interaction" of an X-ray photon and an electron in Compton scattering are brought out: foremost amongst them are the demonstration that Compton scattering depends upon the de Broglie total energy of the accelerated particle, and its corresponding wavelength; that the re-emitted (outgoing) X-ray photon also has an energy and a wavelength limit, and that the lowest limit wavelength of the outgoing X-ray photons occurs with an incoming X-ray energy just shy of 1.022 MeV:

Below or beyond the 0.012Å limit, and in full accordance with empirical data regarding X-ray absorption, any incoming X-ray "colliding" with an electron will generate a lepton and a "recoiling" nanoatom of dipositronium which will collapse into a gamma ray.

For anticathode X-ray production by accelerated electrons, the same process of physical limitation of kinetic energy places a maximum X-ray energy at 511 keV, with a minimum wavelength given by

in full conformity with the Duane-Hunt law. This monograph must be purchased before it can be viewed.  It is available exclusively to ISFA members, or by special arrangement.